The IMD World Competitiveness Center's Digital Competitiveness Score serves as the third metric. This score is the result of a combination of elements, such as technical expertise, readiness for the development of new technologies, and the capacity to develop and advance innovations.

The final indicator of how essential technological advancement is to a particular government is the percentage of GDP that a nation spends on research and development.

Some intriguing findings are obtained when these variables are combined to provide a ranking of the nation's technological prowess. One is that Israel has risen to the tenth position, surpassing bigger or more industrialized nations like Singapore, Germany, the United Kingdom, and Hong Kong. 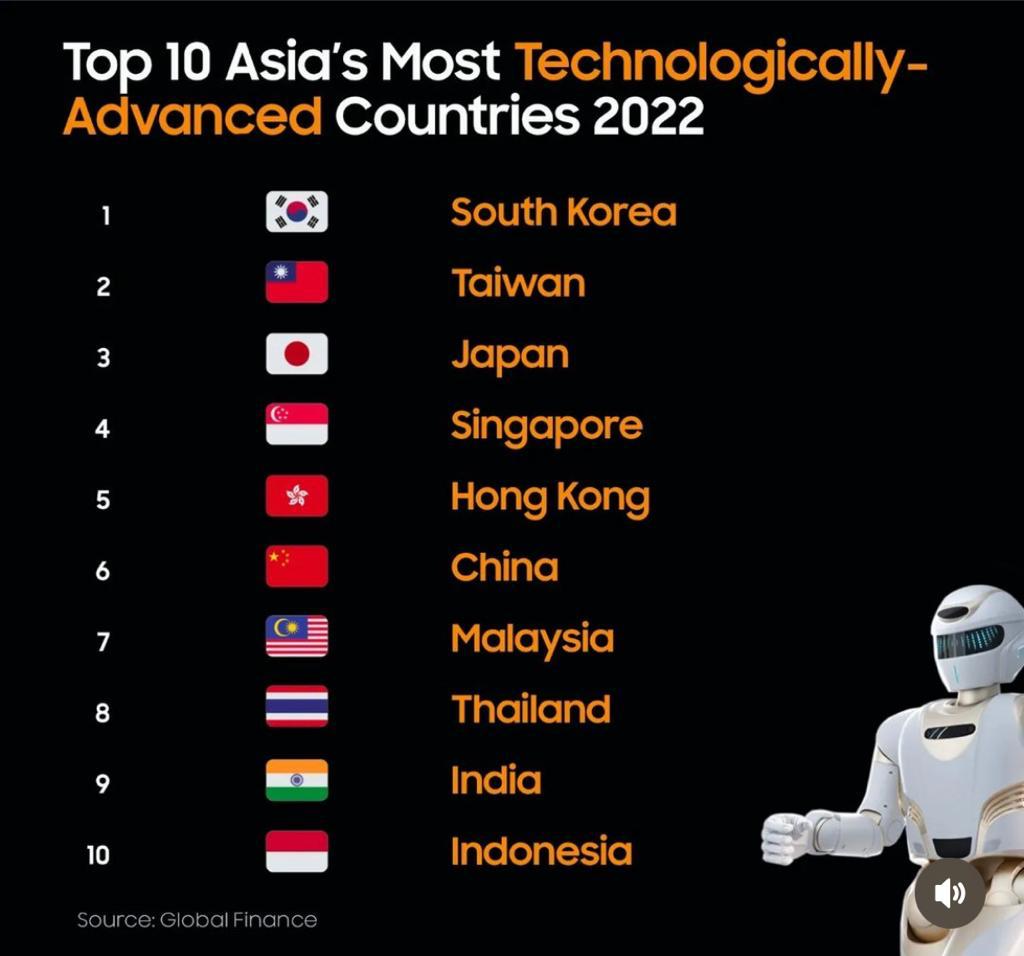 In terms of smartphone adoption, Israel lags behind all of these other nations, and internet usage is not extremely high among Israelis.

Another fascinating finding is that resource-dependent nations perform well in terms of internet usage but poorly overall. According to comparable nations with lesser GDP per capita and lower internet usage, the United Arab Emirates (18), Qatar (25), Saudi Arabia (40), and Russia (44) rank quite badly.

The causes are numerous but support the idea of the "resource curse": nations whose economies are heavily dependent on the export of natural resources have a lack of innovation and progress.

The UAE and Qatar both have low levels of innovation and allocate only modest amounts of their GDP to R&D, despite having nearly 100% of their people online. As a result, these nations are in a challenging situation because there is limited room for progress on this particular statistic given that almost all of their citizens are online.

In contrast, nations with dynamic, multifaceted economies like Denmark (3), Japan (7), and Germany (13) that make significant investments in R&D are better positioned to gain from it.

An interesting feature of this year's rating is that great economic development, not necessarily technological advancement, is a common factor in nations with high internet usage. High percentages of people utilize the internet in nations like the United Arab Emirates (18), Qatar (25), Iceland (20), and Luxembourg(24).

These nations all have poorer digital competitiveness scores, LTE penetration, and R&D spending than the global average, according to the IMD World Competitiveness Center. Compared to technological advancement, per capita GDP appears to have a stronger correlation with internet use as a percentage of the population. Making the internet accessible to the general public is crucial, but so is bolstering creativity.

As usual, East Asian and European nations dominated the top slots in the rankings. Ten of the top 20 countries were located in Europe, and five were in East Asia, demonstrating the importance of regional competition in the fight for technical growth.

The disparity in scores across Europe is nevertheless important to note. Eastern European nations like Hungary (36) and Poland (35) fall in the bottom end of the top 10, while Nordic nations like Denmark (3) and Sweden (5) dominate the top 10.

Western and Central European nations are located in the center. The future direction of this significant discrepancy within Europe is still uncertain.