The eighth billionth human will be born sometime in late 2022, marking a new turning point in human history.

The number of people on earth has doubled, from four to eight billion, in just 48 years. Of course, there are not equally as many people on the earth as there are countries, and they vary greatly in size. The charts in this page are meant to provide context for how the eight billion people are spread out globally.

Asia will have 4.7 billion people, making it the area with the highest population in 2022.

The two enormous population hubs of China and India rule the continent. A significant change will take place in 2023 when India overtakes China as the world's most populous nation. China has held the top position for millennia, but due to the disparity in growth rates between the two nations, it was only a matter of time before this milestone was reached. 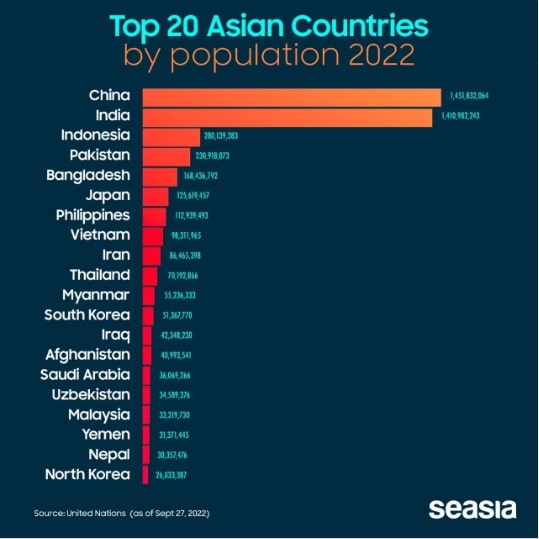 When it comes to population growth, Asia is an area of contrasts. On one end are rapidly contracting nations like Singapore and Japan. On the other hand, Middle Eastern countries with strong population growth rates of 4-5% include Oman and Qatar.

On the verge of passing the 100 million population threshold, Vietnam will join a select group of 15 nations.

According to the 27th edition of the United Nations' World Population Prospects, 2022, published on Monday, India will overtake China as the world's most populated nation in 2023.

China still has the largest population in the world (1,426 million people), but India has overtaken it with a slightly smaller (1,412 million) population.

According to UN estimates, India's population will surpass China's aging population of 1,317 million by 2050, reaching 1,668 million. 9.7 billion people would be living on the planet in 2050.

With almost 1.4 billion people apiece, China and India had the greatest populations in these areas in 2022, according to the research. By 2037, Central and Southern Asia is anticipated to overtake Asia as the world's most populous region.

In India, the latest National Family Health Survey (NFHS) revealed that the country's Total Fertility Rate (TFR) fell from 2.2 in NFHS 4 to 2.0 for the first time, below the replacement threshold of 2.1.

The decline was attributed to increased contraceptive use, spacing of pregnancies, access to healthcare, and encouragement of family planning, as well as rising levels of wealth and education.