Unique Food Ingredients only from Indonesia

Indonesia, an archipelago of more than 18.000 islands is one of the most populous nations on earth. With those various nations, Indonesia serves much kind of food in unique taste. What are the secret ingredients inside the Indonesian foods? The country is rich in biodiversity yet apart from cinnamon, cloves, nutmeg and kecap manis (sweet soy sauce), its native produce and unique ingredients elude most of the world.

And of course, inside the unique taste there must be unique ingredients. Here are some unique Indonesian ingredients you have probably never heard of:

The foraged black nut of the keluak tree is lethat for humans when raw. But given some time and energy- which involves first boiling and then wrapping them in banana leaves and burying in ash for 40 days to release the hydrigen cyanide that makes them poisonous- they become a sought after delicacy in Indonesian, Malaysian, and Peranakan cooking. Cooked buah keluak tastes like an intense truffle, with less fungi and more earth. They are used for a variety of dishes: the Toraja people of Sulawesi powder the nut to bake with fish or meat. Contemporary Peranakan chef Malcolm Lee uses it to make an extraordinary ice cream, which he serves with caramel at his Singapore restaurant Candlenut.

Tempoyak is fermented durian which was developed as a way to both use overripe or poor quality durians and preserve them through the months after durian season. Removed from its seeds, the flesh is mixed with salt and stored for three to five days at room temperature to ferment and develop probiotics. It can be eaten with plain rice or used for making curry, often with catfish. Sambal Tempoyak is a Sumatran dish that blends the fermented durian with coconut milk and chili.

Growing up to four centimetres in length, they are often described as creamy when raw and resemble bacon when cooked. Sago grubs are frequently prepared and fried with sago flour, which is the starchy pith extracted from the heart of a sago palm. The beetles only lay eggs in damaged sago palms.

Not much people like the smell of terasi but it is one of unique ingredients from Indonesia and gives us strong and delicious taste in our food. It is fermented ground shrimp paste with salt is found troughout Southeast Asia, from Manado to Chiang Mai. Terasi is Indonesia’s variety and include in a range of dishes, such as Sayur Asem, Gado-gado, and Rujak. Sometimes this ingredient also included in Sambal.

Fluctuating in colour, from soft purple-red to dark brown, the paste’s intensity also depends where it originates from. In Cirebon, a coastal city in West Java, terasi is made from tiny krill called "rebon", which forms the city's name. In Sidoarjo, East Java, it is made from mixing fish, small shrimp and vegetables. The island of Lombok produces a more savory and sweet paste called lengkare. Pungent and sharp, with a distinct smell and taste of rotten fish, it is an acquired taste. 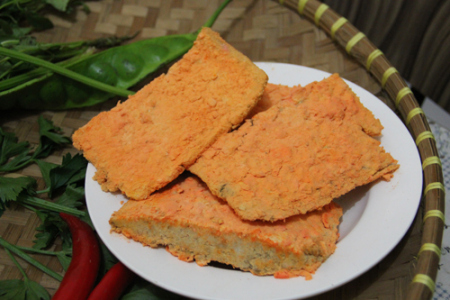 This ingredient is produced similar to tempe, one of the best Indonesian traditional food made from fermented soybeans. It is also consumed in a similar fashion; as a deep fried snack resembling potato chips, or rolled with rice and steamed in a banana leaf as known as buras. Sundanese sometimes also mix oncom with rice and consume it as main course. The best oncom is said to come from Bandung, as they use whole peanuts instead of leftovers. Meaty and hearty, with a slight almond taste, oncom is said to lower cholesterol when consumed regularly.