(Photos) Life Along the Mekong River That Will Fascinate You

The source of the river’s great productivity is its seasonal variation in water level and the range of wetland habitats inundated. The Mekong River Basin’s biodiversity is immense, even in comparison with other parts of tropical Asia. Its biodiversity is fundamental to the viability of natural resource-based rural livelihoods of a population of 60 million people living in the Lower Mekong Basin.

To learn more about the Mekong River Basin, herewith are a collection of photos gathered by CNN with its story behind those scenes:

THE MIGHTY MEKONG: Roughly brings the meaning "Mothers of Rivers' in Thai and Lao languages, the Mekong River is a sacred lifeline in Southeast Asia.

CHINA TO VIETNAM: The upper half of the Mekong originates in the Tibetan Highliands in southwest China where it is known as the Lancang. It flows southeast through Yunnan province, pictured here, before crossing into Southeast Asia.

CHINA TO VIETNAM: The brown waters of the Mekong meet the tripoint of China (left), Myanmar (right) and Laos. From there, it flows along the border of Myanmar and Laos, and then roughly traces the border of Thailand and Laos before crossing Cambodia and Vietnam and emptying into the South China Sea.

CHINA TO VIETNAM: The entire river runs for around 2,700 miles, and drains on more than 313,000 square miles of land.

RIVER OF LIFE: Millions of people up and down the Mekong depend on the river for its resources and also for their livelihoods. Here, a fisherman casts his net into the river in Phnom Penh, Cambodia.

RIVER OF LIFE: Many local farmers are engaged in rice production, particularly in the Mekong Delta in Vietnam, pictured here, also known as "Asia's Rice Bowl".

RIVER OF LIFE: The river is home to vast aquatic wildlife including the endangered Mekong giant catfish and Irrawaddy dolphin, pictured here.

RIVER OF REFUGE: Some communities live in boats on the river, such as the Cham people pictured here on the western bank of the Mekong in Kampong Cham, Cambodia.

RIVER OF REFUGE: While many people in Kampong Cham farm rice, most take fishing as a source of food and supplemental income.

RIVER OF RISK: Communities living on the river are vulnerable to flooding, particularly during the monsoon season. In 2013, floods in Cambodia left more than 80 dead and wreaked havoc in villages like this one in Kandal province.

RIVER OF MANY: The Mekong is not just one river. Thousands of rivers and streams feed into the main river, including the Nam Khan tributary in Laos, pictured here. During the dry season, villagers build a bamboo bridge to cross the river. 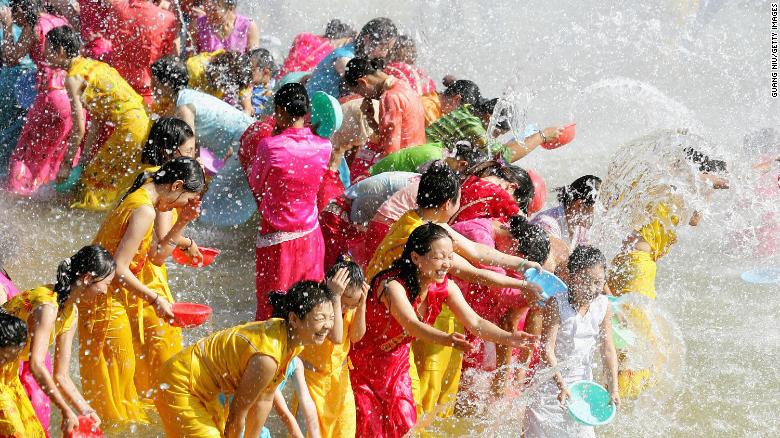 RIVER OF CELEBRATION: It is also a sacred place for local communities. Each April, a water splashing festival takes place on the banks of the Lancang-Mekong River to celebrate the new year for the Dai ethnic minority of Xishuangbanna in southwest China.

RIVER OF CELEBRATION: Another water festival takes place in Cambodian capital Phnom Penh on November annually to commemorate the end of monsoon season.

This long dragon boat carrying 179 rowers and measuring 87.3 meters will be on display during this year's water festival.

RIVER OF LOVE: Life has flourished in and around the Mekong for millions of years, and continues to do so for the communities and countless species that call it home.