Scientists from Indonesia and Singapore have found at least 12 species of hermit crabs, prawns, lobsters and crabs that are new to science in the deep sea off western and southern Java.

The South Java Deep Sea Biodiversity Expedition 2018 (SJADES 2018), the first such expedition jointly organised by both countries, also yielded more than 40 species that are new records for Indonesia.

The figures may be the tip of the iceberg as the researchers now go through the 12,000 specimens collected during the 14-day expedition. Thirty-one scientists and a 25-member support crew set off on the Indonesian research vessel, Baruna Jaya VIII, on March 23 from Jakarta. They sailed anti-clockwise towards Cilacap in southern Java and back, sampling at depths averaging 800m and up to 2,100m.

About 800 species were uncovered, and some that were collected include sponges, jellyfish, starfish, urchins, worms, crabs,and fish. 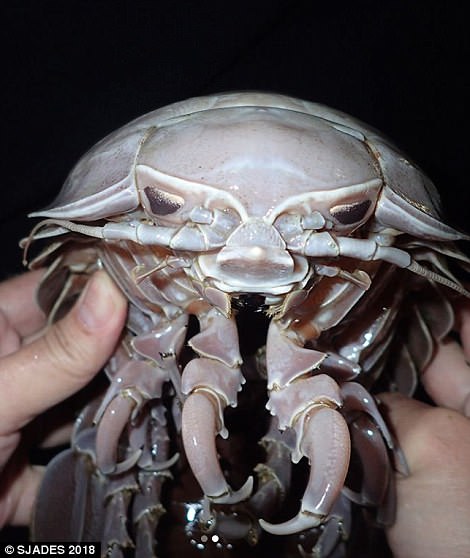 12 new species were also identified from this survey.

Two years on, the team has confirmed that another new species has been identified from the expedition.

Yes, it is this cockroach-looking critter.

This supergiant isopod is now bestowed with the scientific name Bathynomus raksasa.   To most people, it is the stuff of nightmares – a massive crustacean dredged from the depths of the ocean that’s rightfully earned the nickname, ‘deep sea cockroach.’

The huge creature, which the team has also dubbed the Darth Vader Isopod, is just one of countless remarkable species found during the expedition off the Indonesian island.   Scientists also found a new type of hermit crab, a shiny-eyed shrimp, and a crab with fuzzy spines.

In an Instagram post, researchers involved with the mission said the staff 'could not contain their excitement when they finally saw one,' referring to the deep sea cockroach.

Researchers from the National University of Singapore (NUS) and the Indonesian Institute of Sciences (LIPI) carried out the expedition for 14 days between March and early April.

The area covered included a long stretch of the Indian Ocean off Java's southern coast as well as the Sunda Strait that separates the island from Sumatra.

But the discovery of species entirely new to science 'tells us that there are things happening in that part of Indonesia that we don't know,' said Ng, who co-led the expedition.

The researchers examined 63 sites as they sailed from Jakarta to Cilacap town in southern Java and back.

Three new species of spider crabs were discovered during the expedition, the scientists said in a statement.

One of them had a plate protecting its eyes which resembled oversized ears while another was bright orange in colour.

Another discovery was a new species of hermit crab with bright green eyes, according to Indonesian scientist Dwi Listyo Rahayu, also a crab expert and the expedition's co-leader.

One new species of shrimp had shiny eyes that reflect light, the scientists said.

the scientists will carry out a detailed study of the more than 12,000 creatures from 800 species they had picked up on the expedition.

It's likely the huge discovery will pave the way for years of research.

The team expects to publish their findings in 2020.