According to representatives of the Kingdom's top rice industry organization, Phka Rumduol jasmine rice from Cambodia has been named the World's Best Rice for a record-breaking fifth time at the TRT (The Rice Trader) World Rice Conference in Phuket, Thailand, on November 17.

One of the types of long-grain jasmine rice exported under the "Angkor Malys" certification mark is Phka Rumduol, which has become a favorite choice of worldwide purchasers. According to the Cambodian Agricultural Research and Development Institute, it took 10 years of development and testing before the variety was made available to farmers for usage. 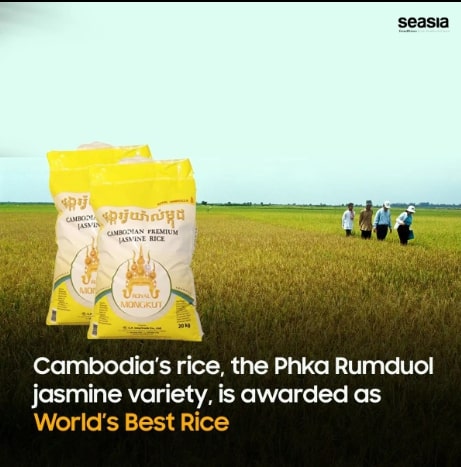 The same day, Song Saran, head of the Cambodia Rice Federation (CRF), praised the achievement as a "wonderful honor" for the regional rice industry in an interview with The Post.

We would like to thank the CRF team, the farmers, the workers at the rice mills, the agricultural community, and the ministries of agriculture and commerce for supporting the production of the "best rice," enabling us to take part in the competition and bring the prize back to Cambodia, the official said.

Phka Rumduol previously won the prize four times, three years in a row from 2012 to 2014, and then one more in Hanoi, Vietnam, in 2018. From 2015 to 2017, the jasmine variety finished second three times in a row.The chief driving force behind Phka Rumduol's participation in this year's tournament is "Andy" Lay Chhun Hour, CRF vice-president and CEO of Battambang-based City Rice Import Export Co Ltd, Cambodia's largest rice exporter.

Chhun Hour expressed great delight in the role the Cambodian rice industry played in this year's prize, telling The Post that the recognition will result in an increase in exports as well as a number of other advantages for the local population.

The indigenous grain must pass a number of tests for shape, texture, smell, and taste to win the prize, he noted, adding that "this reputation will further assist promote the quality of Cambodian rice" and acknowledgment thereof.

On November 17, Phka Rumduol received its sixth crown as the World's Best Rice. Minister of Agriculture, Forestry, and Fisheries Dith Tina expressed her "deep congratulations" on Facebook and that the accolade will "bring pride to Cambodia."

The agriculture ministry stated on November 17 that milled-rice exports have been performing well this year, totaling 509,249 tonnes in the first 10 months of 2022, up 10.67 percent from the 460,169 tonnes registered at the same time last year.

This fifth triumph, according to Chamroeun, is a "huge source of pride" for the CRF and the government and further establishes the reputation of Cambodian milled rice as a top choice.

In order to assure quality and standards in the production and processing of rice, he added, "I'd like to congratulate the CRF, partners and members, the agricultural community, as well as farmers who work hard."