The Best "Panoramic-View" Train Journeys in Asia. You Should Try it! (Part 3)

Traveling by rail offers ease and a view of a nation's stunning and ever-changing scenery. Asia's diverse landscapes make for a beautiful setting for some genuinely unforgettable train excursions. Here are what BambooTravel.uk judges to be the top nine Asian train journeys, from the extremely luxurious to the modest. 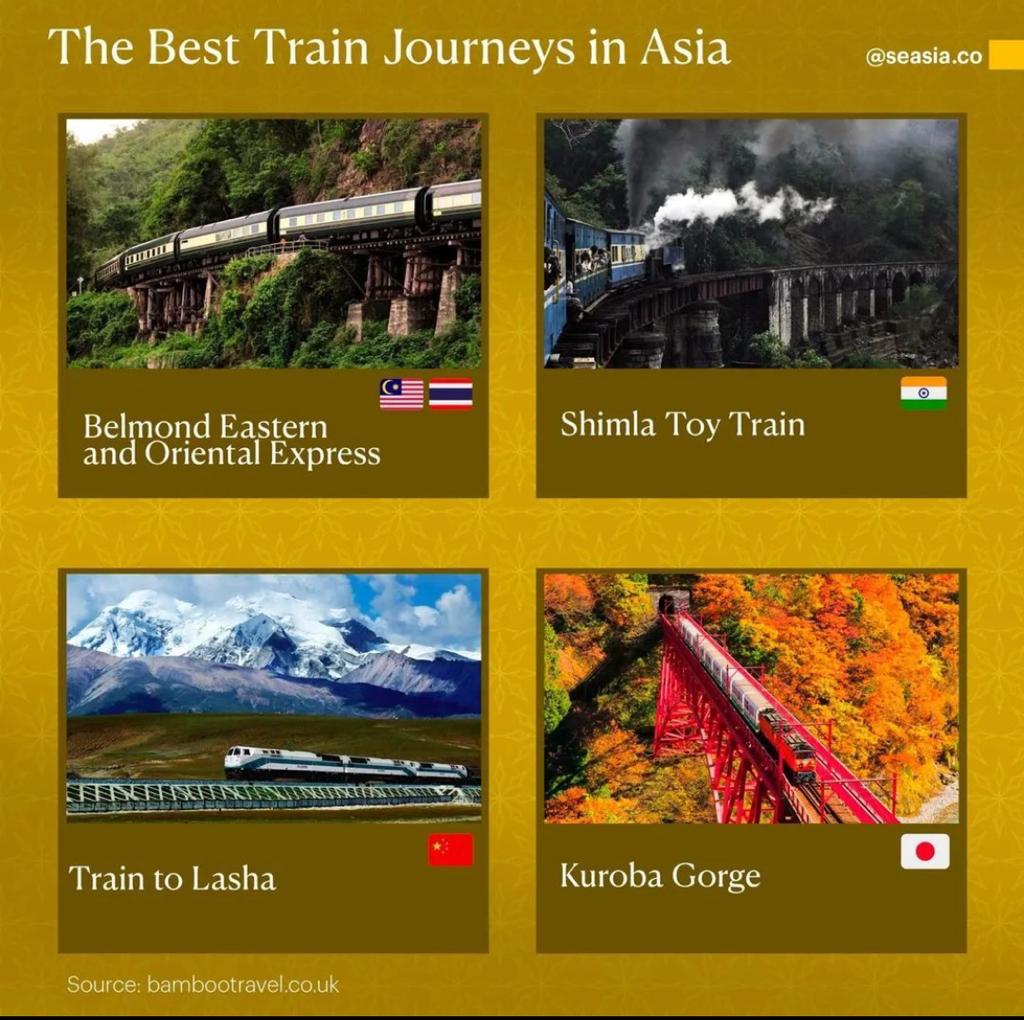 With silky upholstery, gleaming glassware, and cutlery, the interior of the train is the height of luxury. The train stops at Singapore, Kuala Lumpur, and Bangkok, three of Southeast Asia's most vibrant cities, as well as at the Death Railway Museum and the bridge over the River Kwai.

It also travels through some breathtaking countryside. The train's specially constructed observation car in the back is the ideal spot to relax with a drink while taking in the scenery.

In India, taking a train is a memorable and highly recommended experience. Although the nation is blessed with many famous and unforgettable train trips, from the opulent Maharaja's express and Deccan Odyssey to the straightforward interstate trains, a trip on one of the vintage toy trains is a necessity.

India's toy trains are a holdover from the British Raj, when British officials would physically head for the hills to the hill stations to escape the monsoon heat. The Shimla toy train, the Nilgiri mountain railway (seen below), and the Darjeeling toy train are our three favorite historic "play trains" that we heartily endorse.

But if we had to choose just one train ride to suggest while visiting India, it would have to be the well-known Kalka to Shimla route. The Shimla toy railway winds its way over 919 curves, 969 bridges, and 102 tunnels. UNESCO has acknowledged the history of the route and its breathtaking views, making it one of the very few heritage railways in the world.

Over the past ten years, China's high-speed rail network has undergone tremendous expansion, making travel between most cities quick and simple. Train passengers in this enormous nation will enjoy riding through scenery with contemporary towns, lush rice fields, and powerful mountains.

The line connecting Beijing and Lhasa, the capital of Tibet, is the most notable route in China's new rail system. Even though the line is contentious, looking out of your window in the morning to the glistening lakes, permafrost blocks, and towering snow-capped hills of the Tibetan Plateau is a once-in-a-lifetime experience.

In 2015, our very own Robin traveled on this line; he detailed his experience in a previous blog. For those seeking to experience the breathtaking and untouched scenery of Tibet on this unforgettable journey, our Train to Tibet itinerary has been created.

Japan has a vast and up-to-date rail system, and its recognizable bullet trains are renowned for their effectiveness around the world. While the majority of Japan's intercity routes are quite unremarkable, there are several really beautiful routes that travel over the Japanese Alps.

The "Hida Wide View" connects Nagoya and Takayama, which are both located on the edge of the Japanese Alps, and was especially created so that passengers may take in the breathtaking scenery. Both the front and back carriages feature wide windows, providing an unimpeded view. The Kurobe Gorge train would have to be our choice if we had to choose a favorite.

A 20 kilometer stretch of the Japanese Alps' craggy cliffs and forested ravines are traversed by this charming little scenic train. The train is best appreciated as a day trip from Kanazawa and runs from mid-April through November. Our favorite time of year to take this spectacular trek is in the fall when the woodland ravines are a riot of beautiful colors.