In the third quarter, Malaysia's economy grew at its strongest rate in more than a year, outpacing that of many of its Southeast Asian counterparts, but the central bank cautioned the outlook remained darkened by the possibility of a global slowdown.

In the third quarter, the economy expanded by a higher-than-anticipated 14.2% off a weak foundation in the year prior, when COVID-19 containment measures restrained economic development.

The central bank stated that a slowdown in quarterly expansion was consistent with an anticipated decrease in growth, even though it believes 2022 growth will exceed government estimates. 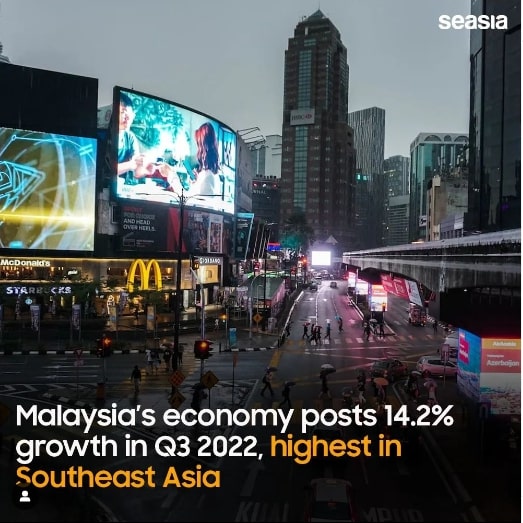 After the government began to relax restrictions in April, Malaysia's economy recovered from the COVID-19 outbreak quickly, but there are worries that future export growth could be harmed by a recession in the global economy.

The governor of the central bank, Nor Shamsiah Yunus, was reported by Reuters as saying during a press conference, "We accept there are still some spots in our economy that have yet to return to pre-pandemic status."

"Malaysia's exports will be severely impacted by the deceleration in global growth."

The period from July to September saw the strongest growth in the gross domestic product (GDP) since the second quarter of 2021. In a Reuters poll, economists predicted that GDP would expand 11.7% after increasing 8.9% in the previous quarter.

According to Nor Shamsiah, the increase in the third quarter was caused by a persistent increase in domestic demand, a good labor market recovery, strong exports, and sustained policy support. It outperformed the economic expansion of several of its regional rivals, such as Vietnam, Indonesia, the Philippines, Singapore, and Indonesia.

The GDP number also comes just before this month's national elections in Malaysia, where the economy and inflation are likely to be top concerns for voters.

The central bank stated that it anticipates GDP will exceed the government's 6.5%–7% forecast in 2022, but that growth will fall to 4.0%–5.0% the following year.

According to the central bank, headline inflation likely peaked at 4.5% in the third quarter and will then begin to decline, but it will still be high.

This year's record government subsidies and price controls in Malaysia have largely kept inflation in check, but there are still upside possibilities given that the central bank has announced its fourth straight 25-basis-point rate hike.

The Federal Reserve's aggressive monetary tightening has helped to boost the U.S. dollar, which has been supported by the rate hikes as the ringgit has plummeted 10.8% against the dollar this year. The ringgit currency will change to suit Malaysia's economic realities, according to Nor Shamsiah.