2022 has been a very strong year for Asian cinema, with everything from maximalist action blockbusters to minimalist arthouse dramas. Some of the year's most talked-about and highly acclaimed films have been made on the continent, directed by a remarkably brilliant group of renowned auteurs (S. S. Rajamouli, Park Chan-wook) and quickly rising debutants (Carlo Francisco Manatad, He Shuming). 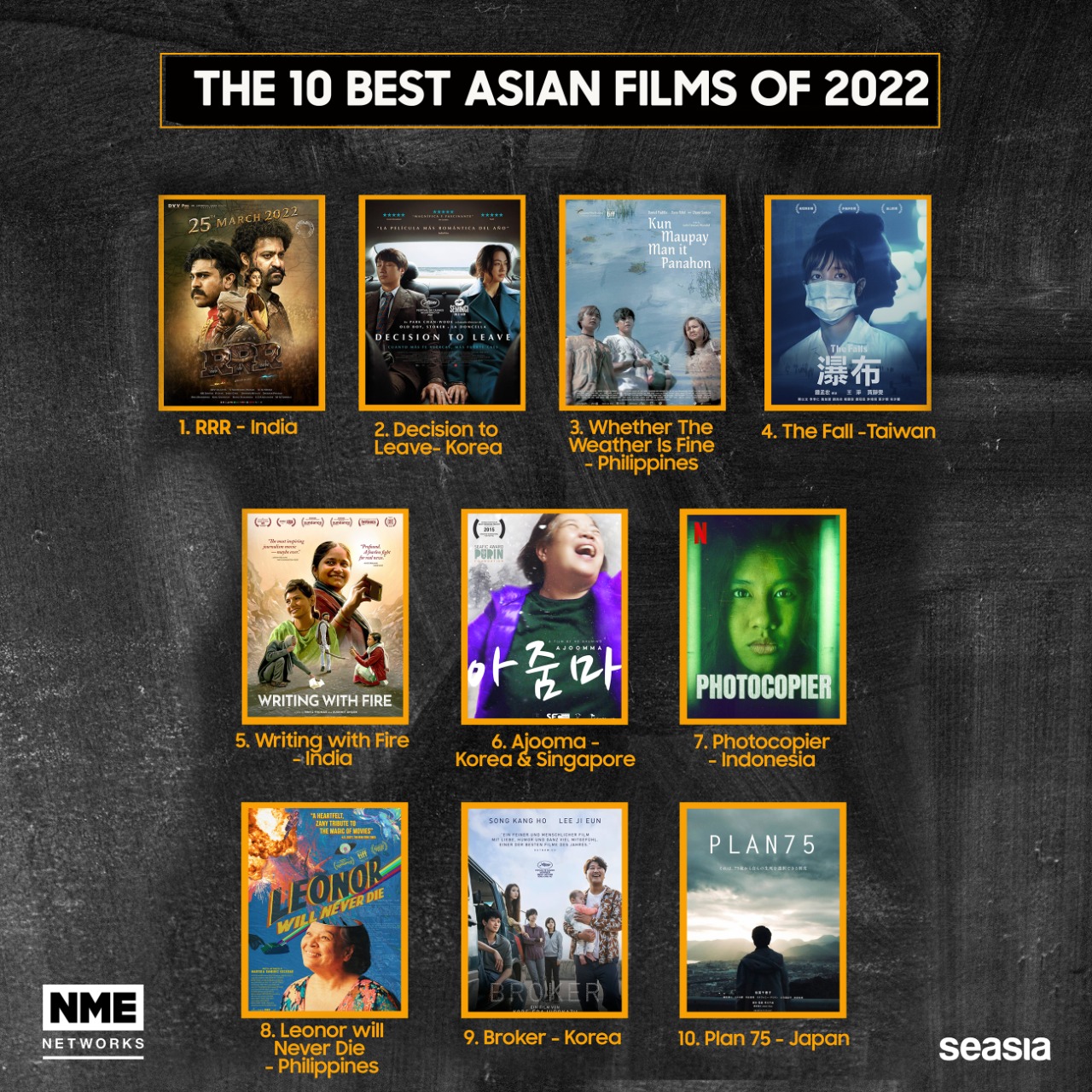 Southeast Asia has produced some of the year's top Asian films, covering a variety of genres and cultures there as well as traditional filmmaking powerhouses like India, South Korea, and Japan.

This movie, which is about a government initiative called Plan 75 and the voluntary euthanasia of older individuals to address the increasingly aging population of Japan in the near future, is set there.

Plan 75 is a sensitive portrait of three people who are impacted by this new program and is grounded in realism: an elderly woman who lost her job and has no prospects, a young Plan 75 salesman who genuinely thinks he is doing his country a favor, and a Filipino caregiver who works in a nursing home.

A sensitive and humanitarian work of dystopian fiction, directed by newcomer Chie Hayakawa, tackles the horrifying human cost of "pragmatic" policies that treat people as disposable.

Hirokazu Kore-excellent eda's drama further establishes him as one of the most sympathetic filmmakers now at work. Broker follows a mother who wants to sell her unwanted child to desperate parents on the Korean illicit market as well as a couple of "baby brokers."

The journey of the trio, who are driving around the nation in a ramshackle van in search of a loving couple eager to adopt the child, develops into a deep and nuanced examination of discovered families. This bleak story of child trafficking, which is infused with love and tenderness, is handled with the gentlest of touches and genuine humanism, giving no judgment on its criminal protagonists.

For fans of Shoplifters, The Florida Project

8. Leonor Will Never Die (The Philippines)

The 1980s corny Filipino B-action movies are the subject of Leonor Will Never Die, a kooky satirical love letter. A retired action director from Manila named Leonor Reyes is the subject of this comedy. The seasoned director tries to relive her golden days when she comes across a screenplay competition advertisement while currently dealing with financial hardship and familial loss.

Accidentally put into a coma while working on an unfinished script from years ago, Leonor is transported into a dream world based on her unfinished movie. Leonor is a trippy, crazy, funny, and moving head trip full of corny melodrama, awesome battle scenes, and self-reflexive humor.

For fans of Adaptation, Birdman

In his feature film debut, Wregas Bhanuteja tells the story of Sur, a young Muslim student whose life is turned upside down after passing out at a party. She believes that she was date-raped and roofied, and she also discovers that party selfies taken while intoxicated have been secretly posted to social media.

The humiliated girl decides to look into what happened that night after her scholarship is cancelled and her parents reject her. In addition to being a compelling whodunit, Photocopier makes incisive social commentary on how survivors of sexual assault are marginalized and ridiculed.

For fans of Veronica Mars, Unbelievable

Ajoomma, hailed as the first-ever collaboration between South Korea and Singapore, follows the tale of Auntie Lim, a middle-aged Singaporean widow who is completely enamored with K-dramas. She suffers since she is no longer defined by the traditional roles of wife, mother, and daughter as her adult son prepares to move out.

Auntie Lim makes the decision to travel alone to South Korea for the first time after being inspired by her favorite soap operas, starting an unexpected voyage of self-discovery. He Shuming's first film is a fish-out-of-water comedy/mid-life crisis drama that is equal parts funny/farcical and poignant/warm.

For fans of About Schmidt, Sideways

Writing With Fire, a film by Sushmit Ghosh and Rintu Thomas, highlights the fearless reporters of the Khabar Lahariya, the only women-run newspaper in India. The editorial staff of the newspaper, which is mostly made up of members of India's persecuted Dalit caste, is followed as they use cellphones, tenacity, and compassion to expose scandals, expose corruption, and speak truth to power.

Writing With Fire is an inspirational look at the fortitude and endurance of these brave journalists. It covers everything from the difficulties of making the switch to digital in communities with little to no electricity to the everyday threats of violence they confront as Dalit women.

For fans of A Thousand Cuts, Collective

With The Falls, Chung Mong-Hong builds on the widespread acclaim he received for A Sun by showcasing his talent for subtly moving domestic dramas. This intimate chamber piece, which is set in Taiwan at the height of the COVID-19 pandemic, looks at the cracks that develop between a single mother and her teenage daughter while they share a quarantine.

Due to emotional and financial stress, the mother experiences a nervous breakdown, forcing the daughter to support the family financially while also taking care of her mother's failing mental health. This slow-burning character study of two struggling women in close proximity is realistic and subtle.

For fans of A Sun, The Father

3. Whether The Weather Is Fine (The Philippines)

Carlo Francisco Manatad's first motion picture is set in Tacloban, the director's hometown, following Typhoon Haiyan. Three people make their way through bodies and rubble-strewn debris in quest of refuge as their seaside metropolis is reduced to rubble. The trio's last chance of survival as another storm approaches is on a ship headed for Manila, but they struggle to leave their home.

As our heroes encounter unforeseen absurdities and seek meaning in the turmoil, this darkly comedic and surreal movie reflects the dreamy state that disaster victims find themselves in brilliantly.

For fans of After the Storm, Taklub

Returning with a riveting neo-noir romantic mystery is Park Chan-wook. The Decision to Leave centers on an insomniac homicide detective who is looking into a mountain climber's fatal accident. Was it an accident, or did his Chinese wife push him over the edge? A palpable, unrequited romance starts to form as the policeman spends his days interviewing the suspect and his sleepless evenings constantly watching her.

For fans of Chinatown, Vertigo

With this year's superb period blockbuster from S.S. Rajamouli, Tollywood emerges from Bollywood's shadow. RRR is a rip-roaring crowd-pleaser that makes its three-plus hour length feel like 30 minutes thanks to some of the most magnificent action, stunning musical performances, and supercharged passion you'll ever see in a movie.

This fictitious narrative of the friendship between two illustrious Indian freedom warriors who battled against the British Raj—Alluri Sitarama Raju and Komaram Bheem—is an enthusiastic spectacle unmatched by anything else. With its enormous scale, the growing craziness of its bombastic moments, and its anti-imperial core, RRR will astound you.

For fans of Baahubali, Braveheart