Try These Challenging Diving Sites and You'll Discover the Unknown. Only in Indonesia

Indonesia is one of the best countries in the world for scuba diving. With almost half territory of Indonesia is the sea, so this is the reason that Indonesia has so many places for diving.

We bet that you’ve seen your fair share of beautiful corals, colourful fish and maybe even a shark or two. But if you ever find yourself longing for something different, you should know hat Indonesia isn’t just full of everything colourful and nice.

Indonesia serves you not just beautiful diving sites but also challenging diving experience and these spots are perfect for you who has fearless!

In Indonesia's typically wild fashion, the country is home to one of the diverable active volcanoes in the worls. Here, this volcano called Magengetang is constantly releasing sulphur from the earth although it hasn't officially erupted since more than 50 years ago.

Visitors, who reach the area by boat, can descend over the creater of the volcano, which is called Banua Wuhu. In crystal clear viibility, divers can explore pristine reefs with giant sponges and a plethora of marine life.

2. Dive to the dark core of the earth: Lupang Freshwater Caves

This sites is for fearless explorers in search of a thrilling adventure. In West Timor, Kupang City plays host to a series of caverns that are still being discovered. So far, two have been partially mapped: Crystal Cave and Oehani Cave.

Here in these caves, divers can experience a total blackness that is unknown in most other parts of the living world. However, this dive is not a walk in the park and should be attempted only by divers trained in cavern diving.

3. On a shark safari: The Magnet, Belongas Bay

Did you know that Belongas Bay in southwest Lombok is one of the only places in the world can dive woth both scalloped and great hammerhead sharks?

Here, in order to attract such a large school of hammerheads as well as other pelagic species, the elements at this dive site give visitors a wild ride. You need not worry too much about diving with these sharks, as acts of aggression by hammerhead sharks are rare. Their tiny mouths are more suitable for dining on fish than humans. 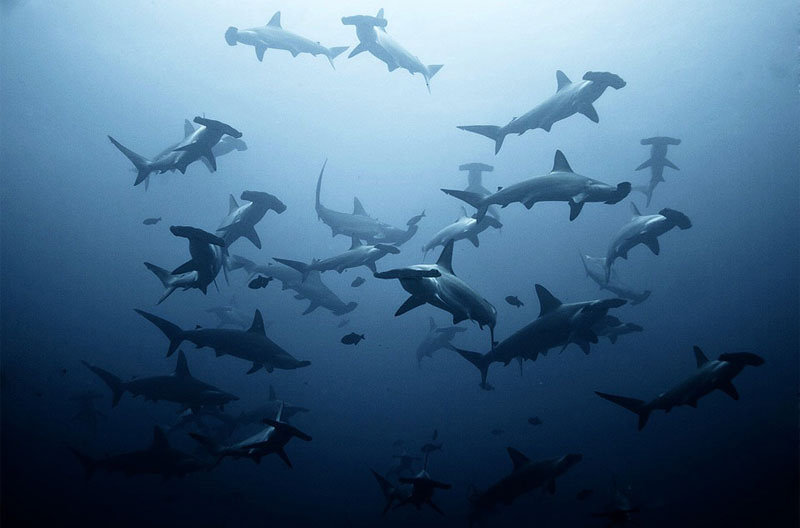 But, be aware! This dive is not suitable for beginners.

In Crystal Bay, the gigantic fish can be seen around 30 meters below the sea level. Scientists believe that the Mola Mola appears in the shallower depths in order to be cleaned by other fish. The fish can often be seen slowly waving its vertical find and eyeing divers as it makes its way around the bay.

For all water adventurers out there, please keep in mind that this dive should only be attempted by experienced divers.

The luxurious warm and clear waters surrounding the quiet volcano are home to both a beautiful reef and tropical fish, but the other residents might throw you for a loop. Here, hundreds or even thousands of sea snakes gile effortlessly in the sea. 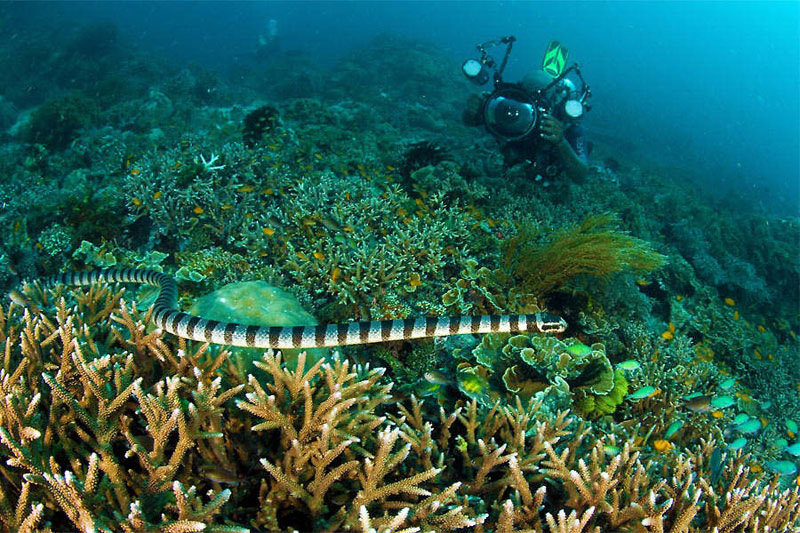 The snakes of Gunung Api are not bashful. They will gently explore a diver's body, even tucking themselves into a BCD (buoyancy control device) or two. While these water serpents are non-aggressive creatures, it is still good to understand the potential harm they can cause.