Asia's Smallest Economies Are Among Its Fastest Growing

Asia's smallest economies are growing faster than giants like China, according to the World Bank.

Cambodia, Laos and Myanmar will post the most rapid expansions in Asia after India from 2017 to 2019, sustaining growth rates of close to 7 percent, according to forecasts released this week. Among the least developed countries, the combined size of the three economies is less than $100 billion, about a third of neighbors like Singapore, Malaysia and Philippines.

Located in the Mekong region, Southeast Asia's frontier nations are stepping up their infrastructure drive to boost growth and diversify their economies as they seek to shed their image as the region's backwater.

Vietnam — which has transformed its economy from a mainly farming one to an exporter of electronic goods like smartphones — stands as their role model, said Eugenia Victorino, an economist at Australia & New Zealand Banking Group in Singapore.

"The promise of transforming the Mekong into a manufacturing hub has a lot of potential," Victorina said. "Vietnam provides the template for an export-led growth from agricultural. We have seen Myanmar, Laos, and Cambodia trying to imitate Vietnam's model of luring FDI to prop up their export capacity."

They're counting on China, which is investing in everything from railroads to real estate in the three countries. 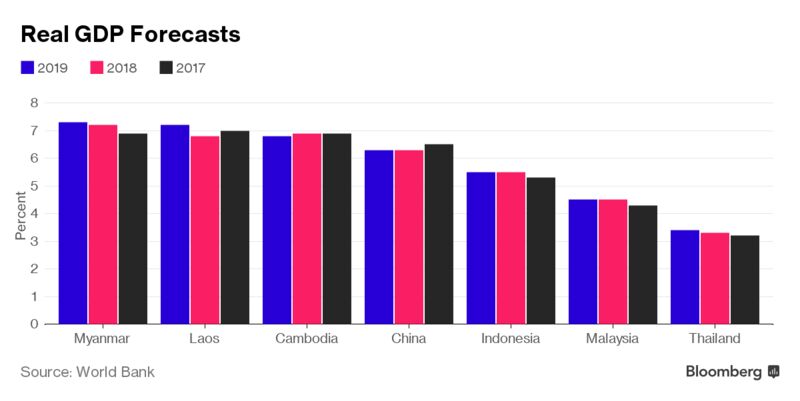 After decades of military rule, Myanmar is liberalizing its economy and adopting market reforms after a transition to democracy. China is its largest trading partner and is building a special economic zone, power plant and deep-water seaport on the west coast.

In Laos, a long-delayed $5.7 billion railway from China through northern Laos officially began last month, the Global Construction Review reported. Cambodia has gained particular appeal for Chinese manufacturers seeking to relocate, which aligns with China’s strategy to export industrial capacity through initiatives such as its One Belt, One Road program.