Whether it’s an electric atmosphere or world-class architecture you’re looking for, the region’s football stadiums have got it all. We take a look at the top five must-visit stadiums in Southeast Asia with noisy audience, and great architecture. 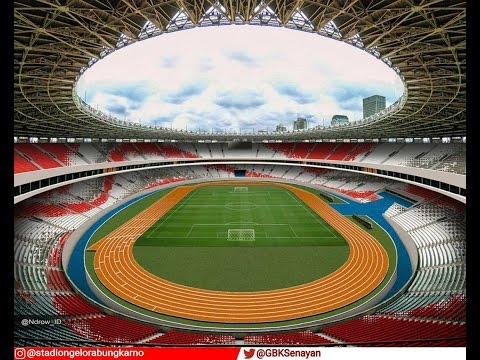 The Bung Karno Stadium in Jakarta is second to none when it comes to atmosphere in Southeast Asia. Built by the Soviet Union in the 1960s, it was once capable of holding 120,000 noisy Indonesians, and while the capacity has been reduced to around 90,000 after renovation, it is still a mightily imposing place to come and play when it is packed to the rafters.

The still-impressive structure played host to the final of the 2007 AFF Asian Cup and will also be the centrepiece of the 2018 Asian Games.

Built for the 1998 Commonwealth Games, the Bukit Jalil Stadium, is an 87,000-capacity monster that plays host to the Malaysian national football team. The noise inside a packed Bukit Jalil is enough to send shivers down the spine of even the most seasoned professional, and with the stadium currently undergoing renovations that will see it decked out in the Tigers’ signature yellow and black colours it promises to be even more intimidating in the future.

While it may not have the best atmosphere, the Singapore National Stadium is certainly one of the most impressive stadia in Asia, and possibly the world, when it comes to aesthetics – and so it should be as costing an estimated US$910 million it is the most expensive stadium in the region. With a retractable roof, rearrangeable lower-level seating, and air conditioning to keep the humid, tropical air at bay, the home of the Lions is certainly a stadium to be proud of, and is deservedly up there on the region’s must-visit list.

The Shah Alam Stadium would be a venue to be proud of for most national soccer teams, but it is not even the Tigers’ home – that honour goes to Bukit Jalil. Still, the 81,000-capacity home of Selangor FC is a beautiful piece of architecture and is a sight to behold when packed to the rafters ahead of a big game.

When it comes to atmosphere it's hard to beat the Rajamangala Stadium in Bangkok. When hosting the Thai national team it is an impressive spectacle – filled with 50,000 noisy, colourful Thai football fans cheering on the War Elephants. It is an experience not easily forgotten.