Anwar Ibrahim, the 75-year-old new prime minister of Malaysia, was sworn in, concluding his three-decade quest for the position that had evaded him repeatedly and resulted in his serving nearly ten years in prison.

Anwar Ibrahim, the country's new prime minister, has vowed to fight corruption, make "Malaysia for all Malaysians," and emphasized that he will not be receiving a salary while Malaysians struggle with rising living expenses. Anwar, who has been running for Malaysia's top position for 24 years despite political assassinations and prison terms, declared that strengthening the country's economy will be his first goal. China, he continued, continues to be essential to Malaysia's economic objectives.

Anwar responded to questions at a news conference attended by a large crowd on Thursday after being sworn in as the nation's 10th prime minister. He said he would work to ensure that Malaysia, particularly the eastern territories of Sabah and Sarawak, does not isolate or neglect any groups. 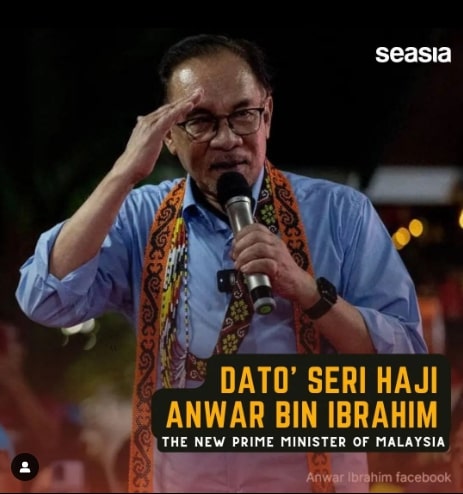 ″[Earlier] my grandson asked me how long have you got to wait [for the swearing-in ceremony]? I said not long, only 24 years,” he said at the Sungai Long Golf and Country Club in Kuala Lumpur quoted CNBC.

Despite "trials and tribulations," he claimed, and in spite of attempts to "scuttle and frustrate" his path to the position of premier, he said, "I am proud to say that we did achieve — not for Anwar, not for the ministers, not [for] the party leaders, but to give the new sense of confidence to all Malaysians. It is their country and their land.

He mentioned judicial independence, anti-corruption concerns, and good governance as fundamental themes that he and his team will never compromise on.

He added, using the Malay term for citizens, "and, more crucially, the question of the welfare of the ordinary 'rakyat,' which covers the issue of the cost of living."

Anwar accepted a call from Turkish President Recep Tayyip Erdogan, who he claimed had "waited two hours" to talk with him, as media waited for the news conference to begin. The two presidents engaged in an overheard discussion about strengthening their bilateral ties.

Mahathir Mohamad, Anwar's steadfast foe, also welcomed him online. The former strongman, who ruled Malaysia for decades, saw a political shift when he lost his parliamentary seat in the most recent election.

Anwar served as Mahathir's deputy in the 1990s, but their relationship fell apart, leading to Anwar's dismissal and subsequent sodomy accusation.

Anwar responded that he would strengthen the relationship with China in the same way as he would with other nations when questioned about it during the news conference.

“China is an important neighbor. It is a priority to enhance bilateral relations with China, trade, and investments. I will not just leave it as this, I think it needs to be enhanced. Similarly, we need to relate to the United States, with Europe … with ASEAN,” he said, referring to the 10-nation Southeast Asian bloc quoted Reuters.

Anwar stated that he would work to "highlight governance and anti-corruption, and rid this country of racism and religious prejudice" in an interview with Reuters conducted prior to the election.

Anwar has advocated for inclusiveness and a reform of the political system in the multiethnic nation for many years.

Nearly 33 million people make up the population, with ethnic Malays making up about 70% of them. The remaining 20% are made up of indigenous communities that include ethnic Chinese and Indians.

Anwar demanded that the Barisan Nasional, Malaysia's longest-ruling coalition, be removed from office and that laws favoring Malays be repealed.

His campaign slogan, "reformasi," or reforms, was heard all over the country and remains the fundamental objective of his alliance.