40 Indonesian Foods We Can't Live Without

It's time to give Indonesia's culinary credentials some time in the limelight.

While technically more of a condiment, the chili-based sauce known as sambal is a staple at all Indonesian tables.

Dishes aren't complete unless they've a hearty dollop of the stuff, a combination of chilies, sharp fermented shrimp paste, tangy lime juice, sugar and salt all pounded up with mortar and pestle. 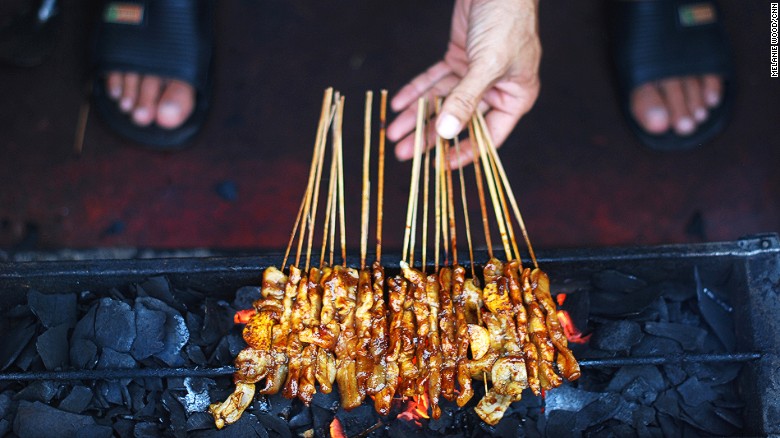 These tasty meat skewers cook up over coals so hot they need fans to waft the smoke away.

Whether it's chicken, goat, mutton or rabbit, the scrappy morsels get marinated in turmeric, barbecued and then bathed in a hearty dose of peanut sauce.

Other nations now lay claim to sate, but Indonesians consider it a national dish conceived by street vendors and popularized by Arab traders.

A favorite among students, this savory meatball noodle soup gained international fame when U.S. President Barack Obama remembered it as one of his favorites during a visit to Jakarta.

The meatballs -- springy or rubbery, the size of golf balls or bigger -- are made from chicken, beef, pork or some amorphous combination of them all.

This traditional meat soup comprises a broth and ingredients that vary across the archipelago.

Common street versions are made of a simple, clear soup flavored with chicken, goat or beef. In Jakarta, home of the indigenous Betawi, soto Betawi garners fame with its sweet, creamy, coconut-milk base.

It's usually topped with crispy shallots and fried garlic, and as much or little sambal as taste buds can take.

To add an element of fun to the experience, diners can try nasi gila (or "crazy rice") and see how many different kinds of meat they can find buried among the grains -- yes, those are hot dog slices.

Literally "mix-mix," the term gado-gado is often used to describe situations that are all mixed up -- Jakarta, for instance, is a gado-gado city.

As a food, however, it's one of Indonesia's best-known dishes, essentially a vegetable salad bathed in the country's classic peanut sauce.

A perennial favorite among native Betawi, nasi uduk is rice cooked in coconut milk and includes a pinwheel of various meat and vegetable accoutrements.

Singaporeans may say they can't live without it, but nasi padang, named after its birth city in Sumatra, is 100% Indonesian.

Nasi padang is a meal with steamed rice accompanied by more than a dozen dishes -- goopy curries with floating fish heads or rubbery cow's feet -- stacked up on the table.

The key to Indonesian fried chicken is the use of small village birds, whose freedom to run around the yard makes them tastier than the big chunks of meat at KFC.

Noodles compete with rice for carbohydrate of choice in Indonesia, ranging from broad and flat (kwetiau) to scrawny vermicelli (bihun).

The best are bakmi -- pencil-thin and, in this case, fried with egg, meat and vegetables.

Fit for a sultan it may not be, but gudeg is certainly the signature of the royal city of Yogyakarta.

The sweet jackfruit stew is boiled for hours in coconut milk and palm sugar, making the fruit so soft and tender it falls apart with little chewing.

Other spices are thrown into the mix but teak leaves give it a brown coloring.

A beef stew from East Java that goes heavy on the keluak nut to give it a nutty flavor and a deep, black color.

The soup base also mingles with garlic, shallots, ginger, turmeric and red chili to make it nice and spicy.

The sight of fried catfish may surprise first-time diners since it looks almost the same as it does living.

Served with rice and red and green sambal, this is simple street fare that fills the belly, which may be why it's a standout across Jakarta.

It is staple on tables around the end of Ramadan, when it's served with packed rice cakes (ketupat).

A little like a mild curry with less prep time required, it's filled with Indonesia's signature spices -- garlic, ginger, cumin and coriander.

For this dish, bakmie is boiled in stock and topped with succulent slices of gravy-braised chicken.

Chives and sambal add extra flavor -- but if it's done right little else is needed.

Pork is uncommon in this Muslim majority nation, but we had to include roast suckling pig given the near hysteria it generates on the Hindu island of Bali.

The Balinese respect their food and lavish attention on its preparation. Before spit-roasting the pig they bath it in coconut water and rub it with chili, turmeric, garlic and ginger to ensure succulence.

Gulai is the common name for curry dishes, namely those from north Sumatra.

From blue-collar workers to government ministers, almost everyone starts their day with this rice gruel, a savory porridge served with soy sauce, fried shallots, shredded chicken, beans and crackers.

Vendors often line busy roads during rush hour to offer these fluffy meat-filled buns to hungry passersby in need of a snack. Sweet offerings include chocolate and green bean. No need to go in search of them, they'll find you.

When palates crave the opposite of Javanese sweetness, this pickled vegetable salad offers reprieve.

The secret is in the dressing, a thin peanut sauce swirled with palm sugar to offset the salty snap of preserved mustard leaf, carrot, cabbage and cucumber.

Otherwise known as water spinach, a common river weed, kangkung gets stir fried with sweet soybean sauce, huge slices of garlic, bird's-eye chili and shrimp paste to take it from a poor man's food to something with a kick.

Pepes signifies the steaming of food in banana leaves, which gives it an earthy flavor that works well with the rich Manadonese spices (woku) it's coupled with.

When matched with tuna the result is a dense, fiery dish that holds its distinct flavors, but should be eaten gingerly.

These fish and tapioca cakes from Palembang in South Sumatra comes in a variety of shapes and sizes.

A distant relative of Dutch minced-meat frikandel, these croquettes are either potato based and filled with beef or made from corn (perkedel jagung).

Think of a spongy, thick crepe made with 10 times the lard and you'll be somewhat close to imaging martabak.

The sweet version looks more like a pancake filled with gooey chocolate, peanuts or cheese, while the savory one is made from crispy pulled pastry like filo that is flattened in a wok as egg and minced meats are rapidly folded in.

This clear, refreshing soup derived from tamarind pairs well with fried food since it's stocked with vegetables and some of Indonesia's most interesting ingredients: melinjo, bilimbi, chayote.

Oxtail soup is loved by Indonesians from all classes. The high-end version -- now the domain of Indonesia's diplomatic corps -- uses imported Australian beef, 7,000 kilograms a month to be precise, and comes complete with steamed rice, pickles, lime and sambal.

Ketoprak is made from vermicelli, tofu, packed rice cake and bean sprouts with peanut sauce.

Nothing more than grilled purple eggplant topped with heaps of chili sauce made from dried shrimp paste (balacan), it calls for a substantial portion of rice to even out the fire engine flavor.

Rice cake serves as the base for this savory morning favorite, a coconut-milk curry made with young papaya, soy-braised tofu and hard-boiled eggs.

Crushed up krupuk add a little crunch to get you going.

Perhaps Padang's most famed curry, rendang is not an everyday food since it takes time and skill to make.

Its secret is in the gravy, which wraps around the beef for hours until, ideally, it's splendidly tender.

These clouds of golden, fried tofu look like little packages behind the windows of the boxes from which they are sold.  This fluffy tofu steeped in sweet soy sauce and chili and served in a pestle and mortar.

A robust soup with a yellow broth full of celery, tomato, and great chunks of goat meat, this dish could make the Campbell's soup man quiver.

Ginger, lime leaf, candlenut and spring onion give it peppery smell that adds to its refreshingly earthy flavor.

Think of it as Indonesia's version of dim sum -- traditional steamed fish dumplings known in China as shaomai.

While squid and prawns have a place in Indonesian cuisine, ikan bakar gets a far better showing for a fleshy texture that is great for dipping.

It is usually marinated in the typical trove of spices and served with a soy and chili-based sauce.

Papaya is one of the fastest growing trees in Southeast Asia, and its bitter leaves are great for sauteing.

Another famed fish cake from Palembang, otak-otak has a more charming appearance, since it's wrapped in banana leaves before being grilled over charcoal.

Or simply "fried foods," gorengan are the most prolific snacks in all of Indonesia.

If you had to name one food Indonesians couldn't live without, it would have to be one that is easy to transport, since they're often on the go.

That makes instant noodles Indomie beloved by all. Sold at grocery stores, village mom and pop shops and even from the basket of bicycles, Indomie calls for nothing more than hot water and a packet of chemical-induced flavoring before it's ready to fill one's tummy.