Taiwan is a multi-island territory in the western Pacific Ocean, formally known as the Republic of China (RoC). Taipei, the island's de facto capital, is the seat of government and the largest metropolitan region. Taiwan has a land area of 36,197 square kilometers (13,976 square miles) and a population of 23.78 million people. Mandarin, often known as Standard Chinese, is the official language.

Is Taiwan a country?
This simple inquiry has a surprisingly sophisticated response. Throughout its history, Taiwan has shifted from nation to territory to nation and back again. The easiest answer in 2022 is "it depends who you ask." A territory must be diplomatically recognized by the 193 member states (countries) of the United Nations to be called a country in today's global political sphere—and while 13 countries (and Vatican City/Holy See) do acknowledge Taiwan as of April 2022, many others do not. As a result, while Taiwan was recognized as a country by the United Nations from 1949 to 1971, it is no longer a member of the UN and is merely classed as a territory—all because of a particularly thorny political position with China.

Countries Recognizing Taiwan as a Sovereign State - 2021
Taiwan is recognized as a sovereign country by 13 countries and the Vatican City as of April 2022: After the Chinese civil war, the US maintained Taiwan's recognition for 30 years before switching in 1979. Despite this, the United States has maintained a strong relationship with Taiwan, including sending military aid to the island, a decision that has caused tension between the United States and China. Within a week of each other in 2019, Kiribati and the Solomon Islands shifted their recognition from Taiwan to China. Nicaragua most recently revoked its recognition of Taiwan in December 2021. As a result, as of 2022, only the Vatican City and 13 of the 193 UN member states recognize Taiwan.

Taiwan is not considered a country for historical reasons.
Until the 1600s, Taiwan was self-governing. It was a Dutch colony in the 17th century, then recovered its independence before being taken over again—this time by China, which dominated the island for two centuries. This continued until 1875, when Japan took control of Taiwan following the First Sino-Japanese War, converting it into a Japanese colony. Taiwan was returned to Chinese authority in 1945, following Japan's defeat in World War II. In 1945, China, then known as the Republic of China (RoC), became a founding member of the United Nations. 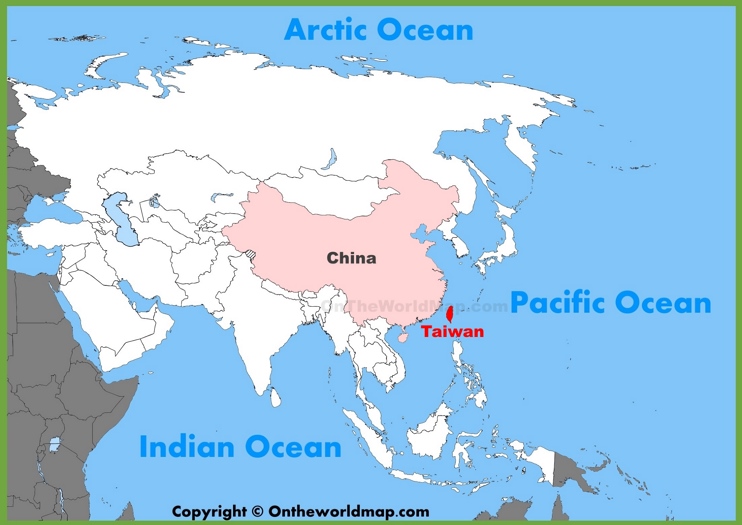 China, on the other hand, was in the throes of a civil war. The Chinese Communist Party's forces drove China's ruling nationalist government from the Chinese mainland in 1949. (CCP). After that, the nationalist administration retreated to Taiwan (along with more than a million other Chinese citizens). The war between the two sides ended in a stalemate, with the CCP holding the mainland, which was renamed the People's Republic of China (PRC), and the nationalists clinging to Taiwan, which was still referred to as the Republic of China, or RoC. Although fighting ended in 1979, the battle was never formally proclaimed over, and no peace treaty was ever signed.

However, over time, the communist CCP government that ruled mainland China developed a persuasive case that it, not the nationlist government in exile in Taiwan, was the genuine government of China. The fact that more than 98 percent of Chinese nationals lived on the mainland—roughly 540 million in 1950, compared to barely 8 million in Taiwan—was the CCP's strongest proof.

Given this fact, as well as mounting evidence that the RoC was in no position to retake control of the mainland, most countries in the United Nations eventually shifted their diplomatic recognition from the RoC in Taiwan to the PRC on the Chinese mainland. This included countries like the United States, which initially supported the RoC and Taiwan. As a result, the UN evicted Taiwan in 1971 and instead recognized the CCP/PRC as China's formal government.

How China prevents Taiwan from becoming a country
Most of the time, Taiwan would simply become its own country, separate from the rest of China. While Taiwan met the majority of the eight essential qualifications for nationhood, there was one major stumbling block: one of the required steps for a territory to be promoted to full U.N. member status (widely regarded as the most important step in officially becoming a sovereign nation) is approval by the U.N. Security Council. A country must be recognized by all five permanent members of the UN Security Council: Russia, the United States, France, the United Kingdom... and China, which utilizes its position to prevent Taiwan from gaining full membership.

The Communist Chinese government's position on Taiwan
China has regarded Taiwan as a rebel province that must be reunited with the mainland since the unofficial end of the Chinese civil war in 1949. China asserts sovereignty over Taiwan, according to the "One-China policy." Two aspects of this policy are particularly significant.

First, China claims that any attempt by the Taiwanese government to gain independence will be greeted with an invasion threat. Second, China's stated position is that no country can maintain official diplomatic relations with both China and Taiwan. Each country must select between the two options. This is one of the main reasons why just 13 countries and the Holy See recognize Taiwan/RoC as an independent republic. As a result, the issue is not that other countries do not recognize Taiwan as a country; rather, they can only recognize China or Taiwan, and most countries pick China due to its higher political and economic significance.

Taiwan's position on t China: When it comes to Taiwan's relationship with China, there are two camps: the Pan-Blue Coalition and the Pan-Green Coalition.

The Pan-Blue Coalition has its own One-China policy, believing that the RoC is China's sole lawful government (including both Taiwan and the mainland). While the Pan-Blue Coalition initially favored reunification, in recent years its position has shifted to just maintaining the status quo. The Pan-Green Coalition views Taiwan as an independent sovereign state, opposes reunification with China (until China's communist government fails), and seeks broad international recognition for Taiwan as a sovereign republic.

Taiwan's international standing
Despite China's efforts to limit its economic and political progress, Taiwan has emerged as one of Asia's main economic players and one of the world's leading producers of computer technology. Unofficial diplomatic ties have been established with Taiwan/RoC by 59 nations (including the European Union, Hong Kong, and Macau), including the United States, France, Germany, Japan, Russia, and the United Kingdom.

Taiwan is also considered a democracy, and it is consistently listed as one of Asia's freest countries by criteria such as the 2021 Freedom House Freedom Index, the Reporters Without Borders World Press Freedom Index, and the Heritage Index of Economic Freedom.