We can thank some of the world's hottest peppers, great levels of taste, and a long, spicy-loving human history for the best spicy cuisine in the world.

According to Indian author Saurav Dutt, who is penning a book about the spiciest meals in the Indian subcontinent, "Spicy food, or at least spiced foods, clearly predates the idea of countries and their cuisine by a very, very long period."

He claims that "anything hot had a wild ancestor." "Predecessors that led to the domestication of chiles, mustard, horseradish, and other plants"

According to Dutt, hunter-gatherer societies have used a variety of wild ingredients to spice their diets. Many ingredients around the world can add a spicy flavor to a dish or stand alone. 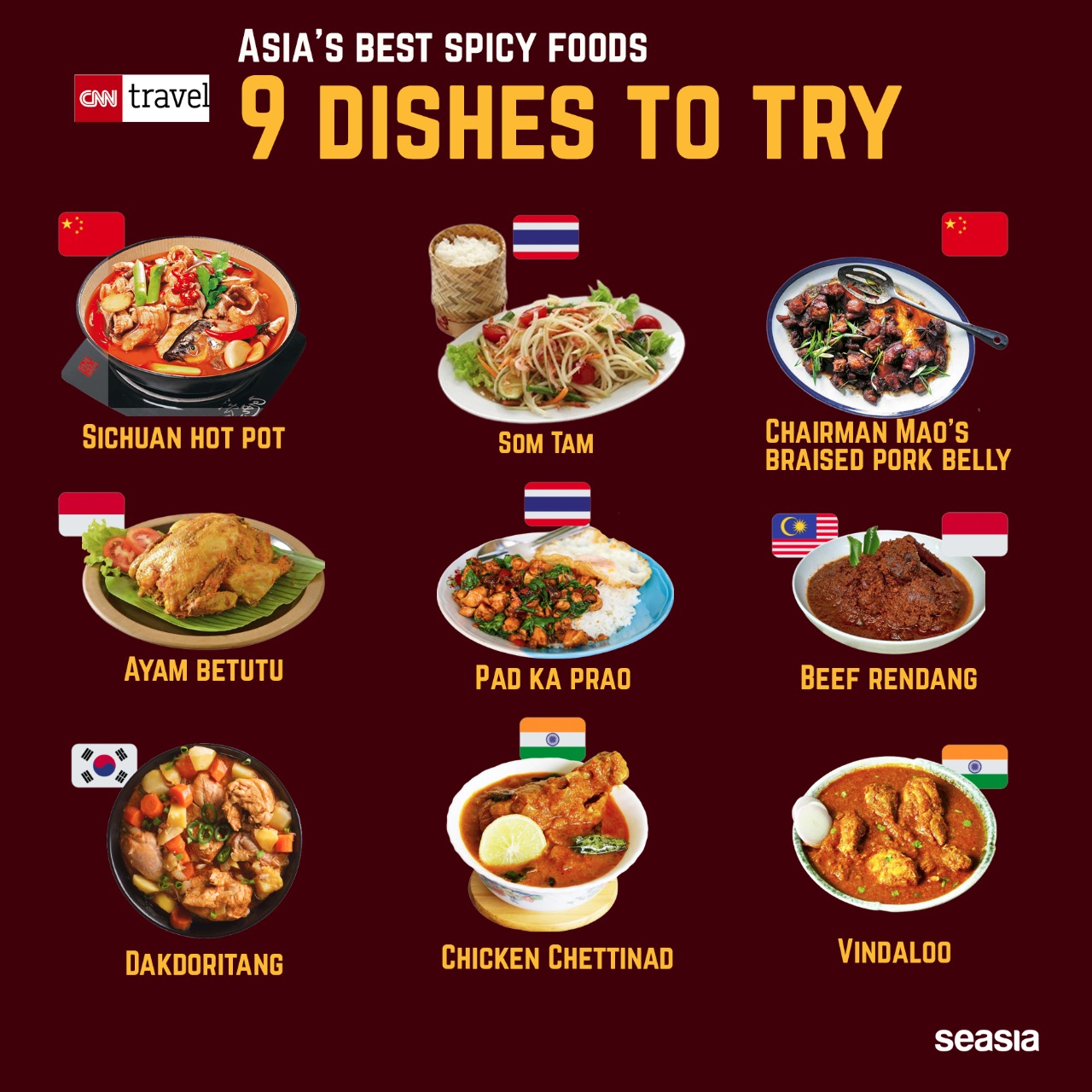 The Scoville Heat Units scale, which measures capsaicin and other active ingredients in chilli peppers, is used to rate chiles, a leading indicator of heat. By that standard, habaneros, Scotch bonnets, and bird's eye chiles fall a few rungs down the mop-your-brow scale, while the Carolina Reaper is among the spiciest in the world.

The mouth-numbing Sichuan peppercorns, ghost peppers, Scotch bonnets, serranos, chiltepin peppers, and more can all be found in the following spicy recipes from around the world.

According to Chinese chef Kwoklyn Wan, a British-born author of "The Complete Chinese Takeout Cookbook," "the joy of this dish is not only the delightful warming ingredients of cinnamon, cloves, star anise, and, of course, the Sichuan peppercorn, but also the fact that you can cook exactly what you like in the bubbling spicy broth."

Tossing in the saucepan to simmer in a mouth-numbing broth created with dried Sichuan peppers and Sichuan peppercorns for a major kick is acceptable for duck, shellfish, chicken, hog, lamb, and seasonal vegetables (the dipping sauce served on the side often has chile paste, too).

The cuisine, often referred to as Chongqing hot pot, is thought to have originated as a favorite meal among Yangtze River boatmen. People who can manage its heat enjoy it all over China and the rest of the world as well.

This crisp and hot salad, which hails from the spice-loving Isaan province in northeastern Thailand, is a standard dish at Thai restaurants all over the world and is also well-liked in close neighbor Laos.

The major component of som tam is green (unripe) papaya, which is typically julienned or shredded for the salad. Following that, the papaya is combined with long beans or green beans and a variety of savory Asian staples, including, among other things, tamarind juice, dried shrimp, fish sauce, and sugar cane paste. The salad gets its necessary bite from Thai chilies, commonly known as bird's eye chiles.

This well-known pork dish, a variation of which is from Mao Zedong's home province, has glossy red hues dancing on a plate that hint at the flavor to come. The communist leader loved the dish and asked his Beijing-based chefs to make it for him.

Chunks of pig belly are simmered with soy sauce, dried chiles, and spices to create Chairman Mao's braised pork belly, also known as Mao shi hong shao rou in China, which is frequently served as the main course for sharing at a family table.

According to Suzie Lee, author of "Simply Chinese" and winner of the BBC's "Best Home Cook" competition, "It is a very tasty and moreish dish thanks to the caramelized sugar and dark soy sauce being reduced and all the aromatics (that cover the pork belly)," in an email to CNN Travel.

This whole chicken meal, which is particularly well-liked on the Indonesian islands of Bali and Lombok, is stuffed with a strongly aromatic spice paste (betutu), which often combines a variety of ingredients including candlenuts, shallots, garlic, turmeric, and shrimp paste.

The aromatics are then enhanced and the flavor of the chicken is maximized by steaming it while it is wrapped in banana leaves. Ayam betutu, which is best shared, is frequently served at religious events in Bali, but you can also find it at eateries that specialize in it all throughout the islands.

Pad ka prao is a staple dish in Thailand, where you can find it at restaurants and street vendors from Bangkok to the islands when you're looking for something filling but with a kick.

The meal is a combination of ground pork, hot Thai chile peppers, and holy basil and can be ordered as spicy as you wish. It is regarded as the Thai counterpart of a sandwich or burger. Many residents agree that a fried egg with a runny yolk is the greatest topping for it.

Beef rendang is a spicy dish that originated in West Sumatra and is now popular among Indonesia's neighbors, notably Malaysia, Brunei, the Philippines, and Brunei.

Kaffir lime leaves, coconut milk, star anise, and red chile are among the spices used in this tasty dry curry meal to add depth. During festive occasions, it is frequently served and handed to guests.

The fiery Korean food that comes to mind may be the fermented cabbage dish kimchi, but dakdoritang delivers an extra kick when you need it.

Comfort food to the utmost, the chicken stew doubles down on its spiciness with large amounts of gochugaru (Korean chili powder) and gochujang (Korean chile paste) blended with rice wine, soy sauce, garlic, ginger, and sesame oil in a braising sauce that loads the bone-in chicken chunks with flavor. It frequently comes with potatoes, onions, and carrots.

The Tamil-speaking group in India's southern Tamil Nadu state is credited with inventing this spicy food, and there is a proverb in South India that you are lucky to "eat like a Chettiar," according to Dutt.

Steamed rice or the thin South Indian pancakes known as dosa, fried chapati, or naan are typically served with the chicken pieces, which are cooked in a mixture of roasted spices and coconut.

Vindaloo is a Goan dish with Portuguese influences that wasn't always supposed to be spicy, according to Dutt. He explains that the dish's original ingredients were pig, potatoes (aloo), and vinegar (vin).

But according to Dutt, when the recipe was transported to curry restaurants in the UK that were primarily controlled by Muslim Bangladeshi chefs, pig was swapped out for beef, chicken, or lamb and the dish changed into a hotter, spicier curry.

The dish's fiery flavor is contributed in part by Scotch bonnet and ghost pepper flakes. However, variants of the meal that lean more toward milder spices, such cinnamon and cardamom, are still available in Goa.